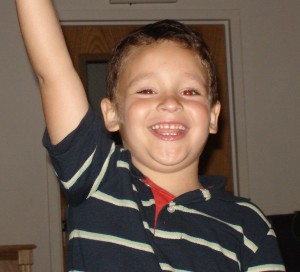 When our little boy was just three years old he started memorizing scripture. I was amazed at the passages he would learn and proudly recite. By the time he was in kindergarten, he was putting me to shame! But I’ve always been thankful that our kids have a hunger for the Word and use it regularly in their daily lives. But one particular time, our son got things a little twisted and had us all trying to figure out what he meant by “dat big scary bird” in the Bible.

It all started during bedtime one night. As we were praying, my little one asked God to protect him from a huge, scary bird. He threw that right in the middle of his other more expected prayer requests so I wasn’t sure I even heard him correctly.

After the “amen”, I asked him what he meant by his request for protection from a bird. He explained that Jesus asked God to protect Him from a big bad bird and he was asking God to do the same thing for him. I tried to decipher what he was telling me so I could clarify and ease his fear of the big bird. But I was stumped.

This went on for several days. Bedtime prayers always included the plea for protection from the evil bird. If that wasn’t funny enough, he started making his request in this really deep exaggerated voice. For whatever reason, he thought this made his prayers more powerful and effective. I had to bite my lip to keep from snickering through the whole prayer.

It was on the way to preschool a few days later when things finally became clear.

“Hey mommy,” my little man called from the back seat. “I know how to say the Lord’s Prayer. Dat’s what Jesus told his friends when they asked Him how to pray. I can say the whole thing. Listen…”

Now you have to picture this little 3 year old boy using his “preacher man” voice and making grand gestures with his arms as he performs this impactful prayer. (And so you get the full effect, I’m writing this prayer phonetically and without all the words just as it was said by my little one.)

“Our Fada… (dramatic pause)…who arp in heben… Hadowed be di name. Diiiiii kingdom COME (emphasis). Di wilt be DONE… on Earf as it is in heben… Gib us dis day our daiwy bread. Forgive trespasses…as tresspassessesss against us. Lead us no temptation. And deliber us from da EAGLE… For dine kingdom, power, glory, eber, eber, eber. AMEN”

I was listening so proudly to his little words that I almost missed it. He thought Jesus was asking God to deliver us from the eagle (versus deliver us from evil)! Mystery solved.

It’s amazing to think how twisted we can get things sometimes if we don’t understand the words we hear or we assume we heard something we didn’t.   And kids see and hear things at an entirely different level which means they are more apt to misunderstand or misinterpret. Thankfully, we were able to clarify what Jesus meant and reassure him no big birds were going to attack us any time soon!

Our Father, which art in heaven,
Hallowed be thy Name.
Thy Kingdom come.
Thy will be done in earth,
As it is in heaven.
Give us this day our daily bread.
And forgive us our trespasses,
As we forgive them that trespass against us.
And lead us not into temptation,
But deliver us from evil.
For thine is the kingdom,

The power, and the glory, For ever and ever. Amen.

Tripping Over My Own Feet & Laughing Along the Way www.capewearingmom.com View all posts by Cape Wearing Mom